The Best Navy Blue Color For Your Season

et’s talk navy. According to Merriam-Webster, the definition of navy is “being of a very dark blue color.” I’m not sure how the names of colors were created, but the navy blue color got its name because it was the color worn by the British Navy. Colors are often associated with meanings based on the feelings the color evokes. The meaning of navy blue is reliable, responsible, and trustworthy. 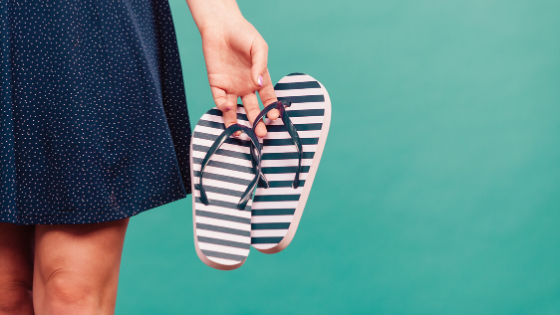 Unfortunately, not everyone can wear navy and still shine. Plus, your best navy blue color is probably not the same as my best navy.  What it truly comes down to is, which navy is right for you? The answer to that question is determined by your season. If you aren’t sure of your season, you might consider a personal color analysis.

It’s hard to create images that adequately show the variances in the navy blue color that looks best on each season, but believe me they exist! Winter and Summer have the most versions of navy, because it is a cool color and these are the cooler seasons. In the image below, you might be able to see that Winter has the darkest of navy blue colors, Summers have the softest, Spring the brightest, and Autumn the warmest. Honestly, most Autumns and super warm Springs don’t look their best in navy, but these are their best versions of the navy blue color. 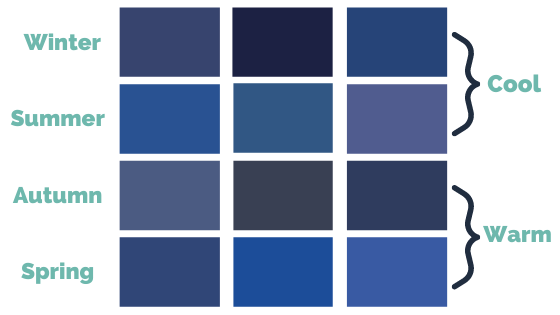 We’ll start with Winter, because navy is often seen as a quintessential Winter color. All Winters have a navy blue color in their palette. Actually, they all have at least three versions! Since they are a darker season, all Winters seem to look good in dark navy blue. Beyond that, though, they vary a bit in terms of which navy is each sub-seasons best navy.

Since Spring is a generally warm season, there are less navy blue colors that are harmonious with Spring color palettes. The neutral Spring seasons – Light Spring and Clear Spring – each have two bright navy colors. For obvious reasons, Light Springs have light and bright navy colors as deeper colors overwhelm them. True Spring and Warm Spring generally don’t receive a navy in their color palette, because they have a warm skin tone and navy is cool. However, when I complete custom color palettes for True and Warm Springs, I often find that many look lovely in a navy with a bit of green in it. Dark marine blue is often a nice version of navy on them, as well as, warm navy. The best navy Blue colors by Spring Sub-season:

Summers look lovely in navy, but look their most harmonious when it’s a softened or brushed version of navy. Summers truly look best in a muted navy. Light Summers are the exception as they shine in the same light clear navy that looks best on Light Springs. Cool Winters aren’t an exception, in that they also look great in a muted navy, but they additionally look beautiful in a softened deep navy. They receive the most versions of navy in their palette due to the depth of their coloring. Soft Summers have have more grey in their navy than any other Summer. The best navy Blue colors by Summer Sub-season:

It’s very rare that I give an Autumn a navy blue color in their custom color palette. I tend to only do this when they have blue eyes, because otherwise, it just doesn’t work with their warm coloring. Having said that, traditional color palettes usually include a few versions of navy for Deep Autumns and Soft Autumns as these two sub-seasons are neutral and lean to either Winter or Summer. Deep or Dark Autumns receive the same midnight blue and deep navy as Deep Winters. Soft Autumns receive the same dark marine blue and dark slate blue as Soft Summers. The navy versions that Deep and Soft Autumns receive have quite a bit of green or brown in them making them potentially work for True and Warm Autumns who don’t traditionally receive navy in their color palette.

True/Warm Autumn: dark marine blue, marine navy (as possibilities, but many are not harmonious with navy)

Making Navy Work For You

I love navy, but it doesn’t always love me. As a Light Summer, I really only look best in my light, bright navy. Given my lightness; however, I don’t have very many dark neutrals that work for me, so navy is my “go to” dark neutral. In the video below, I show you the differences between the navy colors in my closet and how I make the ones outside of my color palette work for me.

If navy isn’t the best color for you, but you still want to wear it, try wearing it on your bottom half paired with one of your best colors in your top or as the base of a great print. If you’re wondering, “What colors go with navy blue?” No worries as navy is a neutral and looks great with so many colors. I especially love it with versions of green, yellow and tan. For warm Springs, it looks great with citron, chartreuse, violet, and peach. Warm Autumns might try mustard, pumpkin, and light moss.

How do you feel about navy? I’d love to hear in the comments.

Want to learn more about color?

Learn more about what colors work best for you with a Virtual Color Analysis. If you want to go even deeper with your knowledge about color, seasons and style in a fun community environment then consider joining  The Color Crew!

Vera Wang said, “I want people to see the dress, but focus on the woman.” When you utilize the colors that are inherent in you, people are focused on you and not your clothing. Value and color contrast are two important elements of your personal color harmony. Once...

END_OF_DOCUMENT_TOKEN_TO_BE_REPLACED

How many times have you looked in your closet full of clothes and determined that you have nothing to wear? Let’s change that by sorting through the keepers in your closet and ensuring that all of your pieces work for your coloring and lifestyle. If you've been...

END_OF_DOCUMENT_TOKEN_TO_BE_REPLACED

How to Shop Less and Love Your Wardrobe

If you want to shop less and still love your wardrobe, you have to learn to shop with intention. It wasn’t that long ago that I shopped just to shop. I had a closet full of clothes, but nothing to wear. This is true for a lot of us, because we don’t curate our...

END_OF_DOCUMENT_TOKEN_TO_BE_REPLACED

7 Easy Steps to Your Best Style

Style doesn’t come naturally to everyone. In fact, there have only been two people in my life who have that special gift to just throw things together and make it look chic. The rest of us have to put in time and effort to figure out what works for us. If you are...

END_OF_DOCUMENT_TOKEN_TO_BE_REPLACED

I discovered personal color analysis while trying to minimize my wardrobe. Many of the experts on minimal and capsule wardrobes talked about color and I started to realize the importance that color has to appearance. I always new that I looked terrible in brown, but I...